After returning from summer break, students were met with heavily enforced phone policies. 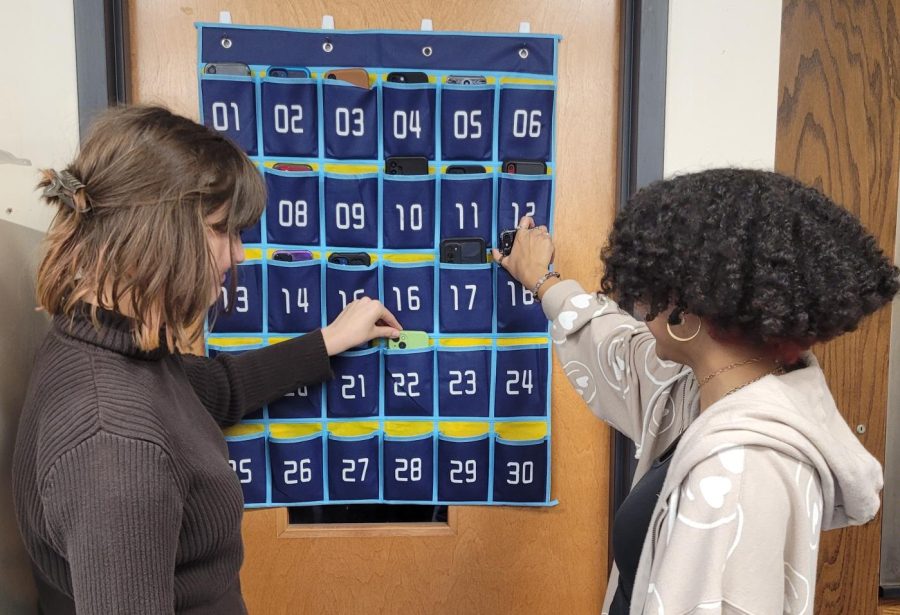 Students turning in their phones because of newly enforced policies

Students returned from summer break and were met with stricter phone policies. Staff are cracking down on the usage of phones in their courses. The enforcement of these policies contrasts with last year’s previous lack of approach.

“I think it was kind of a continuous distraction…When folks are on their devices, they’re not really engaged with the content or with their neighbors with actual humans,” Michael Hibit, math teacher, said.

Hibit considered himself the catalyst for the phone policies, specifically in the math department. Multiple math teachers went on to adopt and revise their own phone policies inspired by his class structure. Still, there are other reasons why teachers have made phone policies entirely separate from Hibit’s philosophy.

“I’ve noticed the students who are on their phone more consistently score lower on class assignments, earned lower grades per semester not just in AP but it affected that class more,” Shannon Carriger, English teacher, said.

Of the supposed effects of phone usage during class, class performance is one of the most prevalent.

“My class averages last year were about 5% higher than previous years,” Hibit said.

He changed his phone policies prior to this year and while the cause of these increased averages may not be certain, there may be a correlation. Other schools have seen similar outcomes. An influx of new staff members has led to teachers from diverse backgrounds.

”We actually did not allow cell phones. They had to stay in the locker during the day and I felt like that really created an environment where there wasn’t a distraction from learning due to cellphones,” Alison Hirons, a transfer teacher said.

Phone policies are not a new concept but technology dependency is ever-evolving and the obstacles educators face are newly emerging.

“I will say there is dependence on phones now that is very different than when I first saw phones in the classroom, and when I first started teaching in classrooms for about 20 years, those early phone interactions were pre social media. So I think social media is the biggest problem,” Carriger said.

The students are not the only perpetrators of technological dependencies. Some teachers choose to extend their phone policies to themselves, practicing certain limitations.

“I don’t look at my cell phone unless in fact all my notifications are turned off…but I don’t look at it unless it’s my planning period while I’m having lunch or after the duty day is over… and I also have real hard limits at home. I stopped looking at my phone and I read for an hour and went to bed at 10 and just made sure my alarm was set and that’s it,” Carriger said.

These kinds of personal restrictions are not guaranteed to come easily. In a society where phone usage is so intimately intertwined with everyday life, phone restriction comes as a challenge even to adults.

“And it is work for me to not be on my phone constantly,” Mr. Hibbit said.

This joint struggle allows them to empathize with the situation of their students.  The phone policies are in place because students have a phone dependency.

“I think that there is, it feels safe to them when a lot of things don’t feel safe,” Hirons said.

A student survey was conducted. Of the 28 participants, 44.4% of the students acknowledged some sort of phone dependency. However, phone policies are not necessarily intended to prey on their predicament. Rather, these policies focus on facilitating a more productive learning environment

Teachers are attempting to help their students to the best of their abilities by cracking down on phone policies.

“Hey, all of your teachers want you to be successful, and if there are little fixes that we can do to make you successful, then that’s what we’re going to try to do, even if it’s against your will,” Hibit said.