With the belief in astrology on the rise, seniors Jamilete Hernandez and Gage Krouch give their opinions and experiences on the topic. 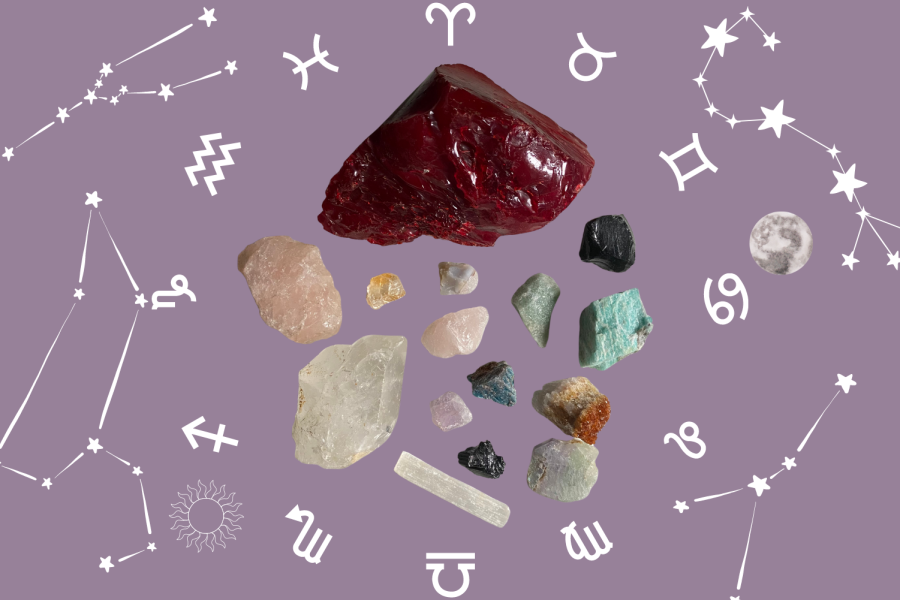 Recently, astrology has been on the rise in teenage culture as a way of finding one’s own identity through spirituality and becoming more in touch with one’s self. Astrology consists of many different components, such as zodiac signs, as well as complementing those star interpretations with aspects from other practices, such as crystal healing, meditation, and the alignment of chakras to help live a more fulfilling life.

“I’m a Leo Sun,” senior Jamilete Hernandez said. “I think a big stereotype for Leos is that we’re self-obsessed, selfish [and] materialistic. I think those are the big main ones. I think the only stereotype that is true is probably confidence, for me, at least.”

“People say that Scorpios are short-tempered,” senior Gage Krouch said. “I’d say that’s true. I get mad easily. Usually when I’m arguing with my friends, we could be arguing over something completely stupid, but I’ll still get heated in [the argument] because I like arguing. And if I’m right, I’m not going to back down from an argument, no matter how stupid it is.”

The Big Six consists of those three signs plus a Mercury sign, Venus sign, and Mars sign. Mercury signs control one’s communication, which can be affected due to the planet being in retrograde once every few months.

“I hate Mercury retrograde so much,” Hernandez said. “I feel like I’m personally affected by it because my Mercury is in Virgo; … Mercury rules Virgo and Gemini, and [Mercury being in retrograde] tends to hit people like me harder with [the placements I have]. Everytime Mercury is in retrograde, something always goes terribly bad and there are just many bad [and life changing] things that have happened.”

“I don’t think [Mercury being in retrograde] affects my life,” Krouch said. “However, my girlfriend always says that she gets more emotional during [retrograde].”

Not only can Mercury retrograde affect how daily life works in the astrological world, but even what placements an individual has within their Big Six is said to affect daily life as well.

“[My birth chart] influences me in some ways, but I don’t let it take over my life,” Hernandez said. “I don’t defend my actions or [say things like], ‘Oh, I’m a bad driver because I’m a Gemini rising. I [let it influence me] to a certain extent.”

Some may feel that their birth chart or horoscope don’t affect their day in the slightest.

“I don’t read my horoscope [very often],” Hernandez said. “Maybe like twice a year if I get bored, but I try not to put it into my head, ‘This is how your day’s going to go.’ I kind of just take the day as it goes. I feel like if I read a horoscope, I’m going to overthink [my day] so I don’t really [read it that often] … I feel like it’s very vague, so I can’t really apply it to many things.”

Other practices can be incorporated into astrology, such as the use of crystals to help better different aspects of one’s life. For example, malachite can help with abundance, violet fluorite with anxiety, and rose quartz with relationships and self-love.

“[I like] rose quartz,” Hernandez said. “I have a rose quartz and it’s my favorite one. I like the color [and] the sharp edges. I don’t really know much about crystals, but I like to buy them and keep them because I think they’re [cool].”

Even those who aren’t into astrology keep crystals, whether it be for the aesthetic or because they still believe it can help better their lives.

“I like tiger’s eye necklaces, I think they look cool,” Krouch said. “But I don’t resonate with any particular crystal.”

Meditation is also another practice that has been a large influence in astrology, originating in ancient India. Some use meditation to help manifest or even just to relax. Meditation is not exclusive to astrology and is typically practiced outside of the belief system and in other religions, such as Hinduism and Buddhism.

“Occasionally, [I meditate],” Hernandez said. “It’s not really a routine for me. I would like it to be a routine, but I can’t do that. Once in a while, I do sound bath meditation with the singing bowls, or if I want to manifest something, I just meditate and that makes me feel like I have some control.”

Angel numbers, like 333 and 444, can show up in everyday life: license plates, clocks, and prices can all show angel numbers and can be taken as a sign for someone to interpret. Not only can angel numbers be a sign, but things like songs, words, or even birds, such as cardinals, can be interpreted as signs.

Signs don’t have to be in the form of an object or a number; even feelings can be taken as a sign.

“I don’t take angel numbers as a sign,” Krouch said. “Something I do take as a sign are [gut feelings] that push you in the right direction.”

Apps can be used to learn more about astrological charts and read horoscopes, such as Co-Star, Sanctuary and Nebula.