A Guide to Spring Concerts in Kansas

A quick guide to upcoming concerts near the Kansas City area. 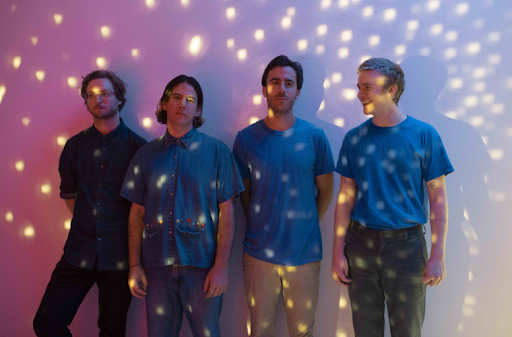 Promotional photo of the band Pinegrove, featured below.

Now that COVID-19 restrictions are loosening up and musicians are beginning to travel again, concerts are back and better than ever. Here is a local guide to concerts for this spring.
*Search through the seven genres below to filter artists. Each show will have a price point signifier on a scale ranging from $ (cheap) to $$$$ (time to start saving up).*
ALTERNATIVE
half•alive, The Bottleneck in Lawrence

This California trio makes feel-good alt music that will make you feel like you’re driving down the highway in a coming of age movie.

grandson, The Granada in Lawrence

grandson’s music has a powerful dystopian edge. He was even rewarded the opportunity to have his song “Rain” appear on the “The Suicide Squad” soundtrack.

Pinegrove, The Granada in Lawrence

Their distinctive abstract aesthetic and nostalgic feeling music makes Pinegrove unforgettable. Their vibe is similar to the likes of other contemporary rock bands like The Backseat Lovers and mom jeans.

Boston Manor, The Bottleneck in Lawrence

This British band originated from Blackpool, England. Their genre is hard to pin down as they exude elements from alt rock, punk rock, pop punk, and hardcore.
COUNTRY
Ashley McBryde, Uptown Theater in KCMO

Originally born in Arkansas, Ashley moved to Nashville to follow her dreams in singing and songwriting. She’s succeeded in her dreams, receiving three nominations last year from the Country Music Association.

Charley Crockett, The Granada in Lawrence

Known for his new spin on Americana blues, Charley uses his distinctive voice to pave his way in the industry.

Kenny is a prominent blues artist currently on his 25th Anniversary tour with his band. One of his most recognizable songs is his 1997 “Blue on Black”.
FOLK
KALEO, Arvest Bank Theater at The Midland in KCMO

This folk rock phenomenon is known for its enthralling live performances. They have received incredible feedback for their music and impressive tours.

Rolling Stone magazine called John Gorka “The preeminent male singer-songwriter of what has been dubbed the New Folk Movement”. His serene voice truly soothes the listener.

Former school teacher turned musician received his English degree from University of South Carolina. His music is acoustic and down to earth.
INDIE AND POP
Poppy, The Truman in KCMO

Viral Youtube star Poppy is famous for her strange voice and slightly disturbing performance art. Poppy is currently on a world tour performing her hyperpop songs.

girl in red, The Truman in KCMO

A Norwegian indie/bedroom pop singer popularized on TikTok has risen to fame. She has been marked as a “queer icon” for her impact on the LGBTQ community.

Hippo Campus, Arvest Bank Theater at The Midland in KCMO

Whimsical and catchy sounds are Hippo Campus’s main jam. The band’s name is a reference to the region of the brain’s temporal lobe that helps control emotions.

This band is local to Kansas City! Their music is calming and charming, perfect for a bright spring season concert.

Soccer Mommy, The Granada in Lawrence

Debuting in 2018, this Nashville-born singer has been touring with Paramore, Vampire Weekend, and other big names. Her indie style sets her apart from the crowd. She has been gaining popularity, recently reaching 1 million monthly listeners on Spotify.

Aly and AJ, The Truman in KCMO

This pop sister duo kick-started their careers in the early 2000s. Their most notable release is the hit song “Potential Breakup Song” from their Insomniac album that has recently resurfaced on TikTok.

This solo project by Lindsey Jordan was started when she was just 17 years old. Her voice holds the power of having both “confidence and vulnerability”. Her alluring indie-rock style has held the media captive, nearly gaining her one million monthly listeners on Spotify.

Yumi Zouma, The Bottleneck in Lawrence

New Zealand friend group turned alternative pop band is on tour in the U.S. Their newest single “In The Eyes of Our Love” was released earlier this year.

Beach Bunny, The Granada in Lawrence

This up and coming power-pop band encapsulates deep emotions in their songs. Beach Bunny has a recognizable pastel aesthetic that meshes well with their angsty and other-worldly vibe.
METAL
Tool, T-Mobile Center in KCMO

Tool has received a cult-like following over the years. Since the ’90s, their melting pot of hardcore genres and “mystical aesthetic” has taken over the world of metal.

Deafheaven, The Granada in Lawrence

This ever-evolving black metal band started as a duo in San Francisco. They are currently on a U.S. tour with special guests Holy Fawn and Midwife accompanying them.

Dragonforce, The Granada in Lawrence

Dragonforce is a British power metal band that is known for their humorous and compelling live performances. Their 2005 song, “Through the Fire and Flames”, is credited as the most difficult song to play on Guitar Hero III.

Sevendust, The Truman in KCMO

Nu metal icon Sevendust has a prominent aggressive sound. Their name actually originated from a bottle of pesticide one of the band members found in their grandma’s garage.

Beast in Black, The Granada in Lawrence

This cyberpunk inspired band describes their music as “atmospheric heavy metal with an insanely catchy twist.” To accompany their latest album, they have made a Tokyo-based video game that can be found on the band’s website.

Destruction, The Bottleneck in Lawrence

A piece of the “Big Four” of German thrash metal bands.
RAP
Key Glock, The Granada in Lawrence

Markeyvius LaShun Cathey, protege to Young Dolph, is an American rapper from Memphis, TN. “Proud” is his newest single that came out earlier this year.

The Flyover 2022 has an insane lineup that will attract rap fans of all ages. The event will showcase more than ten artists.
ROCK
Journey, T-Mobile Center in KCMO

The band Journey has been a household name since the 70s. Their classic rock music can be heard virtually anywhere. On this tour they will be accompanied by none other than Toto.

The Airborne Toxic Event, The Truman in KCMO

This band tugs on the heart strings. Their songs, namely “Sometime Around Midnight”, feel familiar but immediately interest-catching.

Circles Around the Sun, The Bottleneck in Lawrence

CATS’s psychedelic, laidback rock comes from a sad and unlikely backstory. Founder of the band, Neal Casal, died of suicide. Before he passed, he wrote to the band, urging them to carry on without him. They now create music in his honor and seek to uplift those that may be in a dark place.