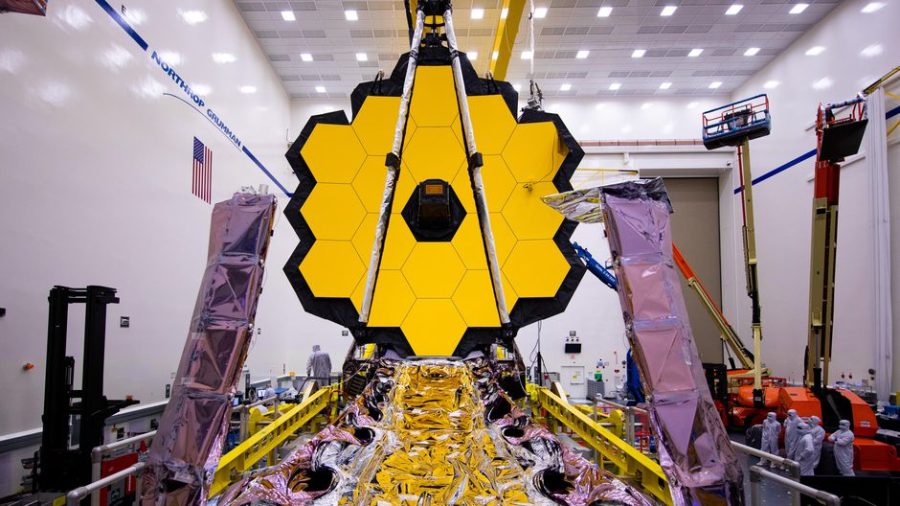 The James Webb telescope still in development - the telescope is set to launch December 22, 2021.

Many planets and other cosmic objects emit this same infrared light. Most familiar objects also emit infrared light such as toasters, electronics, and even humans. The James Webb Telescope contains four infrared instruments. They can be viewed at Webb’s four infrared instruments. This telescope is the largest and most powerful telescope ever built. The North Grumman and NASA team designed this revolutionary technology. According to news reports made by North Grumman, Webb’s sun shield is designed to protect the telescope from light and heat emitted by the Sun, Earth, and Moon. The sun shield keeps the telescope in cold conditions (388 degrees Fahrenheit).

In an interview with Dr. Jonathan Gardner, Deputy Senior Project Scientist for the James Webb Space Telescope speaks on the creation of this telescope and its plans.

“The Webb is the successor to the Hubble Space Telescope one of the most successful telescopes in the history of our planet, and Webb has been in production for almost twenty years and we’re gearing up for launch later this year,” Gardner said. “It’s going to be a large telescope bigger than Hubble. It’s the successor to Hubble and the spitzer space telescope another infrared telescope.”

Being the successor to the Hubble, the James Webb telescope will alter the understanding of the universe. The unthinkable becomes a reality with this complex piece of technology.

“The Hubble works in visible light with Webb,” Gardner said. “We’re going to extend that into the infrared redder light than we can see. It’s going to be a very cold telescope, 225 degrees below zero celsius, and it’s an international project of NASA and the European and Canadian space agencies.”

One of Webb’s biggest goals is to study the first generation of stars to form in the universe. Its infrared camera will allow the telescope to observe these extremely distant objects.

“By combining expertise from both the United States and Europe, we have developed MIRI as a powerful capability for Webb that will enable astronomers from all over the world to answer big questions about how stars, planets, and galaxies form and evolve,”’ Gillian Wright, co-lead of the MIRI science team and the instrument’s European principal investigator at the UK Astronomy Technology Centre (UK ATC) said.

77 days after launch the telescope will spend nineteen days lowering its temperature enough to use its detector instruments.

“Webb will be launched from South America on an Ariane 5 rocket,” Gardner said. “We get rid of the rocket, we get rid of the fairing and then we start to do all of this unfolding. The first thing to come out is the solar panels, to provide power, and a communication antenna, and then we will start to fold out the five-layer sun shield that will protect the telescope from the sunlight and from the earth light.”

The countdown for The James Webb telescope launch can be found at:

A map of events both in-person and online can be found at:

The link to watch the interview with Dr. Johnathan Gardner is shown below: