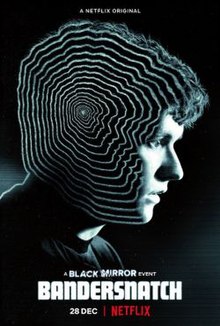 Around October,  Netflix started launching interactive shows/movies on their streaming service for users to watch — or more accurately play. One of the most well-known ventures partnered with Netflix’s exclusive popular hit show “Black Mirror,” to make an interactive movie named “Bandersnatch”.

In “Bandersnatch” the main character is Stefan who is a game designer in the ’80s in London. Stefan bases his game around a book called “Bandersnatch” in which you make choices, and it leads your story like the movie.

The movie can go on for about an hour and a half to reach a final ending. While playing, it progressively gets harder to tell what’s real and what’s fake. The movie starts you off by making small decisions which don’t matter then leads to huge decisions which can cut off certain pathways. Trying to keep this spoiler free as possible… there are no solid endings that would bring content; if a viewer is looking for a happy and the sunshine filled ending you’ll only get some death scenes.

The experience was entertaining, through but at certain points it makes you loop back to entice you to make a different decision. his does drive story; however, it’s a painstakingly long process watching what you’ve already seen. While some of the endings and total story make absolutely no sense, it’s extremely entertaining.

“Bandersnatch” was a total trip of a movie and fun to watch it wasn’t necessarily good like it’s sister show “Black Mirror”. This would be a great time killer if you have an hour or two free to sit back and watch and share what ending you got with your friends.