Singing in our school 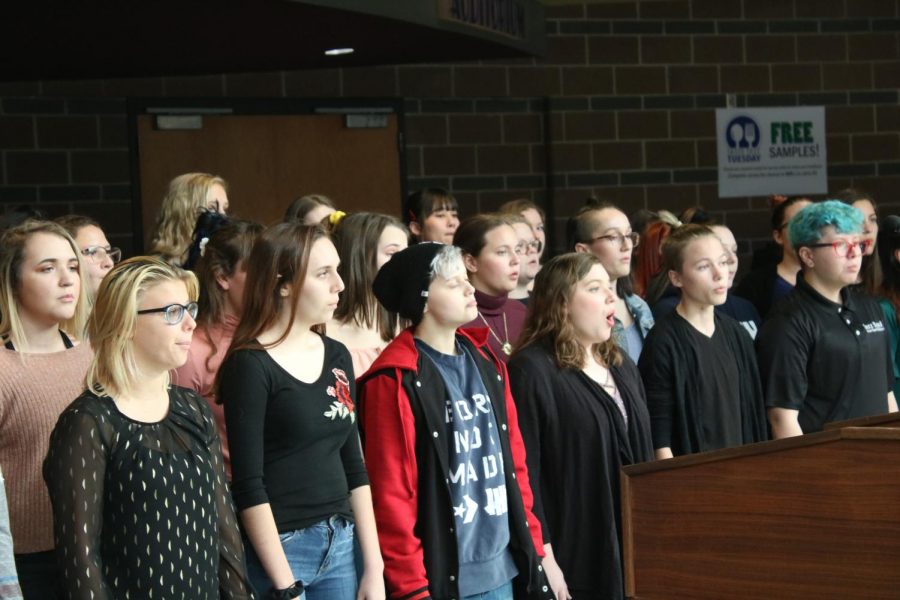 The choir department is quite extensive as it contains six choirs, each of them singing completely different pieces, sometimes in different languages.

Accompanist Becky Kunard describes it as “a place to come and express your emotions through music. Unless you have a battleax for a director, it’s just a cheery and calm place in the midst of all the schoolwork and pressures that you guys have.”

Sophomore Annie Kuzma first joined choir her last year of elementary school because it was the first year they could participate in choir.

“I’d always really loved singing and choir was a really fun place to be, and as I continued through the years, it got even better,” Kuzma said. “There were so many more opportunities to have fun and perform with friends.”

According to choir director Kelli Baker, choir is important for kids’ brains.

“Research shows that people that are involved in choirs, really just music in general, is that their brains are wired differently than others who are not, so they have better cognitive skills. They memorize faster, their math is improved, their reading skills are improved, as well as their critical thinking,” Baker said.” That’s not just me spouting my personal beliefs, it’s actually backed by very relevant and long-term research.”

Baker also says choir is important because of the emotions that come with it.

“I think there is an emotional capacity to people who sing in choir that I think is really important, and it might be lacking with others who are not,” she said. “We sing and utilize the words that go along with the music, and we’re able to connect emotionally to things on a deeper level than people who are not in choir, and that’s important, especially now. People forget about kindness, emotions, and love, and feelings. They go straight to toward being cold to others and very inward. Being in choir makes you makes you think outward to other people.”
Kuzma says that kids should join choir if they, “love music, people, and learning new things.”

Kunard also says students should be involved in choir because of the idea of a team that comes from it.

“I think it’s important for young brains to have the experience that comes from it. Unless they’re on a sports team, they don’t really understand the idea of “ensemble” or being a part of team and being a team member,” Kunard said. “Many kids these days have their own agendas and their wants and needs, so they never think outside of that because they’ve never been part of something that allows that. It doesn’t necessarily happen in a classroom.”

Baker talked about the upcoming events for all the choirs for the rest of the semester, which includes the Senior Citizens Luncheon with Treble Jazz performing.

“[Senior Citizens Luncheon] is a really important event because Treble Jazz sings for the seniors. The seniors in Gardner and in Edgerton really support what we do here at GEHS, so it’s just a little way for us to thank them,” Baker said.

“I think is so special, and I wish more places did this. We will honor our veterans by singing songs to them, we have a theme, and we let people know what it means to be a veteran,” she said.