Sparkles, Sequins, Sweat: The Blazerettes explain all their hard work they put in throughout the year 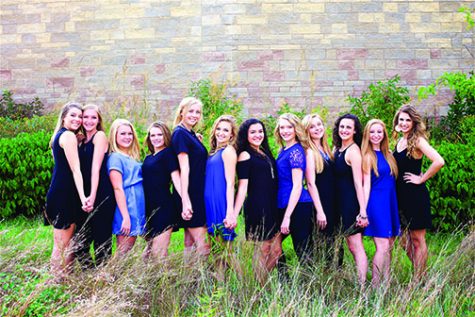 From the ladies competitions to their pep assembly performances and half-time dances the Blazerettes put in a lot of hard work and dedication to show everyone what they are made of.
“We practice 11-12 hours a week,” senior Lauren Haag said.
While the team puts in work throughout the week they prepare for numerous things such as pep assemblies, performances at football or basketball games on Friday nights, and their competitions during the winter months.
Throughout the school year the Blazerettes perform many different dances, this year the coaches decided to focus on songs and dances that sent a message to each of the dancers and the audience during the performance.
“My favorite routine from this year was called ‘Humble and Kind’. Our coaches were sending us a message along with the lyrics since they are our mentors,” Haag said.
Since the coaches were focusing on sending messages, at the annual light show during halftime of the final home boys basketball game, the Blazerettes used a dance to communicate a message to the crowd.
“The message was not to be on your phones all the time and pay attention to your surroundings and the life that you have. Our coaches came up with the idea,” Misse said.
When the dancers were done performing they knew that they had gotten their message across when the entire audience gave them a standing ovation.
Since the girls have been dancing together for awhile they are all very close with each other and they grow strong bonds throughout the year.
“We don’t do it for the medals or for winning, we did it for fun and that we love to dance,” junior Lauren Misse said.
The girls performed at three competitions this year and placed well at all of them.
“The highlight of the season are the competitions, but also all of the fun times we get to spend around each other. It is always very relaxing,” Haag said. “We did an additional comp this year and we placed 2nd with our Jazz routine and 1st with lyrical and mixed routines. We won the highest awards at our other competitions along with the sportsmanship award that is given to two teams in the competition.”
The girls worked very hard during competition season to show other teams the dedication and hours of work they put in.
“At our last competition we got ‘Most Admired’ which is a really big award to get since the other schools vote on it and they voted for us,” Misse said.
Even though the competition season is over, the girls still work hard at practice to get ready for their performances and they will be getting ready for their upcoming Spring show and the three seniors, Lauren Haag, Paige Riggs, and Dani Davis, final performance.
“I will miss my coaches immensely. I will also miss the moments I get with each girl and the Snapchats we all take with each other. I have made so many memories over the past 4 years,” Haag said.
The Blazerettes are always dancing as much as possible and making sure everyone notices them when they walk onto the stage.
“The word I would use to describe my team would be, ‘unforgettable’, because everything we have achieved and done together and the trips as well as experiences. Being on the dance team is the most unforgettable thing that has happened to me and has also been the most rewarding thing to me while I have been here at GEHS,” Haag said.